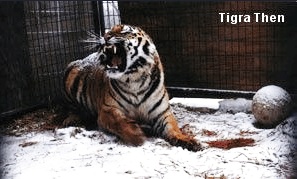 The Zoe Foundation designed and paid for Tigra’s new habitat. I designed a new self locking drop door, laid out the habitat and worked extensively on its construction and landscaping. The following is a synopsis about Tigra written by Mindy Stinner.

“Tigra began life as a performing cat in Hollywood. She was retired when she was about 18 months old, in part because of a broken canine tooth that made her less photogenic. Tigra was placed in a sanctuary that was undergoing a transition. The facility was being moved to a new site, and management difficulties had left the cats at the new facility under the responsibility of an inexperienced man who had presented himself as an animal handler and construction expert. He was not. The cages he built were small and poorly constructed, and he situated the cages on the top of a mountain rather than in the adjacent protected valley. When he had spent most of the funding, he left for another job taking trailers, caging, equipment and tools from the facility.

Tigra’s cage was was a 10′ by 10′ dog kennel pen with a cement floor. She did not have shelter or even a scratching log in the pen. Her cage was placed on top of a mountain, exposed to the winter weather. She did not have a tarp for shade or protection from the rain. Because she did not have any platforms or ways to get off the ground, her back leg muscles had atrophied. She was isolated, apart from the other cats and behind a building.

After an ice storm crippled the facility, I spent time volunteering there, helping to bring it into USDA compliance and helping 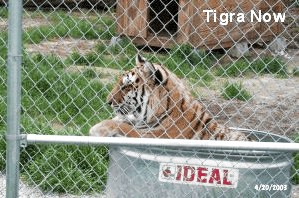 prepare additional cages for the cats waiting to be moved. Tigra demonstrated some extreme fears of objects and people, so I spent a great deal of time working to desensitize her through exposure. I tended her frostbitten feet and noticed an abscess under her chin from an infection she had hidden from her caretakers. When the facility owner realized I had bonded so well to this cat, she asked if I would consider bringing her home to CCI. With so much work still to be done transporting and caring for animals there, it would be difficult to spend the time caring for her daily after required surgery. I gratefully accepted her as an educational animal for CCI. After a trip to the veterinarian, she returned with me to NC as our newest resident.”

(Mouse Over Slide and Use Arrows to Change)